To Mix or Separate that is the Question?


Should bicycle traffic be mixed with other Motorized traffic?  The CROW Design Manual for Bicycle Traffic has an answer summarized by Paul James in his cheat sheet: It is complicated but the clear principle is the busier and faster the road the more separated different modes of transport should be.

In Austria the same principle is applied to produce the following guide. 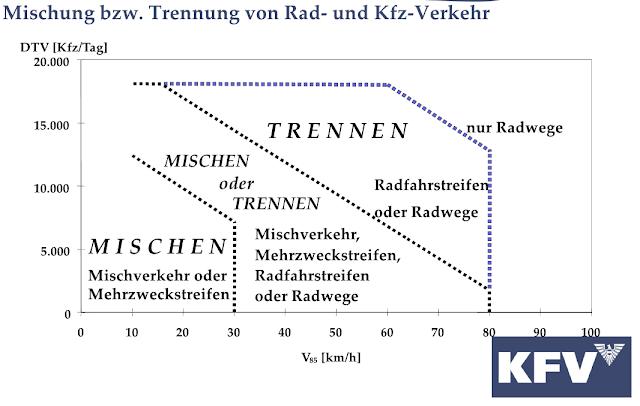 This is a promising start but in Vienna 95% of the roads are at least 30 kmph (30kmph limit does not mean average speed is less than 30). So with the known traffic volume the Austria planner has the advised solution of combined traffic, paint on the roads or separate cycle path.  The divisions are dotted just in case this advice is too restrictive...  This leads to a lot of inconsistency in the type of solution applied to similar locations.

Separate Cycle paths solutions only work well if they are designed to benefit cyclists and do more than get bikes off the busy roads and out the way of cars.

Combined traffic solutions only work if there is no conflict of road function.


Combined solutions should be for the roads you live in where you just need access with motor vehicles.  You should feel comfortable walking in the road and then people will feel comfortable cycling along it or living / socializing / playing / shopping in it.  These roads need to feel like nice places to be for people without the threat of motor cars bulling people away.  The cars need to be separated out of these roads.

There will be some roads where this is not possible because they have a mix of functions.  These roads are problems to design for because they involve a compromise.  I believe one of the main problems in Vienna is that the fist principle of sustainable safety is not applied.  Each road is a compromise rather than having a clear function, so the solution becomes a compromise and there is conflict as a result.  I believe this conflict and the danger associated with it is why a lot of people do not cycle in Vienna.

Sustainable Safety is clearly not understood by planners or politicians in Vienna who try to put behavior laws, or media campaigns in place to cope with the unpredictable or aggressive behavior that results from stressful, conflict situations.  I worry that this will not be a very effective strategy to make Vienna an even better place to live.

Often cycle activists  in Vienna are religiously anti separation.  I have some sympathy with them as they have had years of roads that they used to ride happy a long turned in to door zones and or pedestrian slaloms.  However not all cycle infrastructure is bad and very few people felt comfortable riding along the roads before cycle infrastructure was built.  These two minor points seam to get lost or ignored in the anti infrastructure religion.  There views manifest into a advocacy for mix strategies where cyclists are used as traffic calming devices.  This strategy is not going to create a pleasant cycling environment for anyone and will increase the car / pedestrian / cyclists conflict that is getting so much attention in the media right now.

I want to answer the Mix or Not question in a simple way. If you want to design roads for bikes you must ALWAYS SEPARATE.  Either you have a separate route, separate cycle path or you separate motor traffic out of the street.
Posted by Doug Culnane at 13:46