Safety is a big argument that can bring about dramatic change in the way we design roads and lead to better infrastructure for cyclists.  However the unwritten rule amongst cycling advocates (but often electronically posted comment) is that we do not talk about safety because it discourages cycling (unless talking about cycle paths off course).

Congestion is another issue that I think motivates people for change and to rethink how we travel.  I ride my bike for many reasons but mainly becuase it is the fasted way to get where I want to go.  I know that when I sit in a traffic jam I am ready to consider anything as an alternative (often suicide seams like an option).  Maybe technology is the answer and we now have the navigation software that re-routes based on traffic congestion data.  This is wonderful but we still have traffic jams and millions of lost hours per year due to congestion.  No one cares unless it happens to them and when it does there is not much they can do about it apart form suicide which just creates even more congestion for others.

R. J. Smeed, noted that at some minimum speed, motorists would simply choose not to drive. If speeds fell below 9 mph (15.5 kmph), then drivers would keep away; as speeds rose above this limit, it would draw more drivers out until the roads became congested again.

Is Smeed right?  Is the speed of a chicken the best car infrastructure can ever hope to archive in an urban environment?  Are people interested in alternatives?

Lets look at the most congested Cities in Europe: 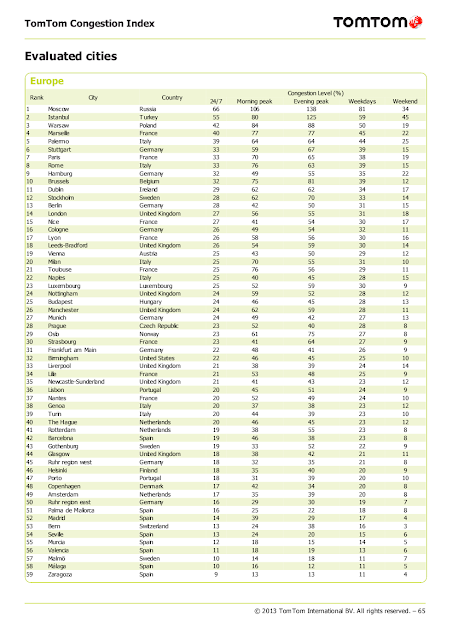 Lets compare these cities to the Copenhagenize Index of Bicycle Friendly Cities. 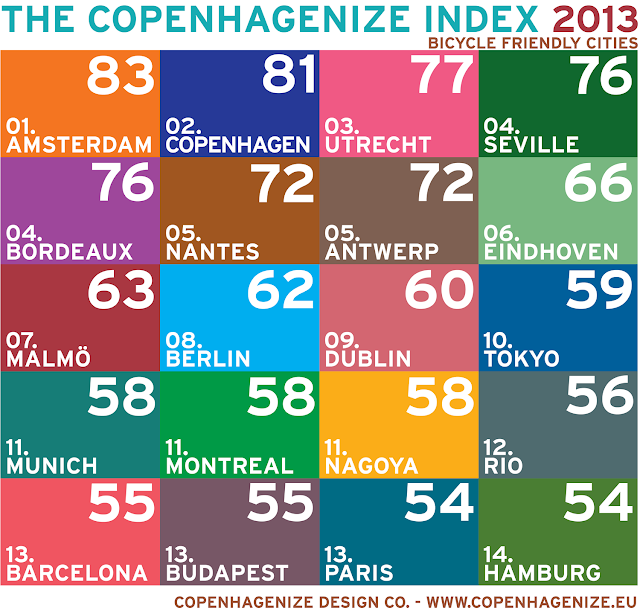 Is it fair to conclude that the top bicycle cities are dealing with congestion better than the cities that build more roads and have no space for cycling infrastructure? Does modal shift provide a real alternative to congestion in our ever crowded cities?  Is this more complicated and there is no relationship at all; in which case allocating space away from cars to cyclists does not have any effect on congestion?

Maybe this is something to consider the next time you loose an hour of your life with people around you that are too afraid to cycle so drive their kids to school before driving to work themselves.  Maybe those kids could enjoy cycling to school on their own?  Maybe this is something to consider as a powerful argument that will communicate the benifits of cycling to a main stream and get support.

If only this (and other benefits) could be communicated in one simple info graphic.

Maybe cycling advocates have a golden bullet to get main stream support for Dutch cycling infrastructure!

There is something cycling advocates also have to recongnise about congestion.  When there is no congestion, people in cars drive faster than a chicken.  Normal people on bikes do not like cyclinging around motor vechicles that are trying to travel faster than them or chickens.  The stop start nature of congestion is not the same as the flowing dynamic of bikes even thought they have very similar averages speeds. As congestion decreases this problem gets worse as less cars drive faster.  Removing cars from the road speeds traffic and leads to an unpleasant cycling environment.  So less cars is not the answer to cycling problems with cars. The roads need to change which is why the Dutch do not expect less cars in general to be the solution for cycle infrastructure and people to use bikes for no reason at all.

The solution to congestion is a viable alternative to the car that has its own separate space and restricts fast moving cars and congestion to it self limiting space.  If you "need to use a car" you can but if you need to get from A to B you can choose the best option only if you have options.
Posted by Doug Culnane at 11:03