Painting over the problem.

The vice mayor announced a bold plan to paint all the cycling lanes a uniform colour to clearly indicate to pedestrians and car drivers where cyclists will ride.  A clear consistent marking of the cycle space is a great idea but....

Of course the traditional (in Vienna) Red cycle paths will now be Painted Green.  Red cycle paths built by the Red Socialists will be painted Green by the Green Party.  This will no doubt lead to huge discussion of which colour to use rather than a discussion about the problem which they are attempting to solve.

London and New York are used as examples where this has been successful.  If the London Super Highways are to be described as a an example we should aspire to I despair.

Painting the existing cycle path (Option 2 of 7) was the 4th most popular option in the Ring Radweg Options survey.  It is seen as an improvement but it is not a fix of the fundamental problem we have on the Ring:

According to the experts:
"Vienna has many large roads running right into the city centre with many lanes. These high volumes of cars
cause problems in the city: not only large streets with many lanes to cross but also fewer space for cyclists and pedestrians. AND all the cars on one street go to other streets where they also ask for space and may cause traffic jams etc. If it would be possible to replace part of the car traffic by bicycle it would result in more “space” in the whole system. One lane of 3,5m can carry about 2000 cars per hour. The same lane can carry about 15.000 cyclists. This is 7 times more efficient. By bicycles many more people can move in the city than if they would go by car. Here is the great advantage of cycling for the city."

Painting a poor solution will not fix it or ease the pressure of space that pedestrians and cyclist have due the over consumption of space by car infrastructure.

The Door Zone problem will not be fixed by painting these terrible lanes.

The incomprehensible rights of way will not be solved by paint alone.

The ENDE problems will not be solved by paint alone.

The lack of usable junctions design for bikes will not be solved by paint alone.

Paint is slippy when worn and wet.  It maybe cheap but it is easily damaged (especially by snow clearing) and needs constant repainting.  It is not what the Dutch do they use Red Tarmac. In Burgenland (Austria) they can get this right. 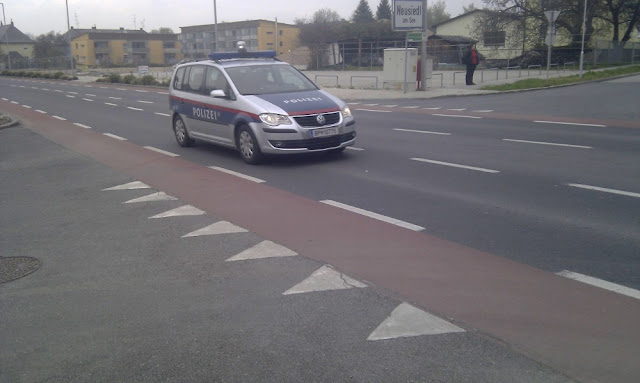 I would really like to support any initiative that makes consistent cycling infrastructure clearly marked.  In principle clearly delimiting the space with colour is a good idea but it does not change where that space is and that the space is poorly designed. Lets not get distracted be the which colour debate and try and get some competent mobility planning rather than politicians painting over their problems and mistakes while they argue about which colour..
Posted by Doug Culnane at 08:54