The Ringstraße in Vienna is a significant ring road around the very center of Vienna for a great number of reasons, but lets concentrate on traffic.  The red super imposed line on the map identifies the Ringstraße and the gray highlights major roads for motorized traffic.  You will notice that the Ringstraße is also ringed by major roads so we have plenty of capacity available.  It is not uncommon for the Ringstraße to be closed in part of fully (ie. demos, parades or as a Fan Zone during Euro 2008).  When this happens motor traffic disperses to the other major roads. 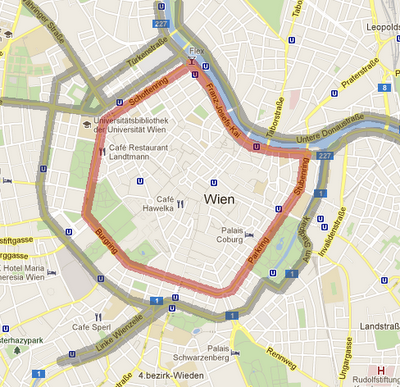 It is also a major route for cyclists who find it easier to go around the inner 1st district than go through the center.  For the most part it is a central 3 lane one way road between 2 tram lines.  Outside the tram lines there are rows of trees, shared cycle and footpaths,  and Access Roads with 2 lanes of parking.  This means that in some places you have 9 lanes dedicated to motor traffic and car parking.

Here is a typical section of the Ringstraße:

Here it is in plan form:

Here I have marked red and black(parking) the space dedicated to private motor cars:

Here I have marked blue the remaining pedestrian space:

Some years ago cycling infrastructure was added to the inner side of the Ringstraße, and recently is being added to the outer side.  These tend to be shared pedestrian and cycle paths marked green below:

The cycle route is often only marked with white painted lines making the distinction between cycle path and pedestrian zone unclear where they are supposed to be separated.  A large number of the pedestrians in the busy summer months are tourists who are unfamiliar with the roads and busy looking at the many sights as they wander randomly.

The cycle route is also routed around obstacles in unclear chicanes.  These chicanes have terrible surface quality, poor sight lines  and confuse pedestrians and cyclists. 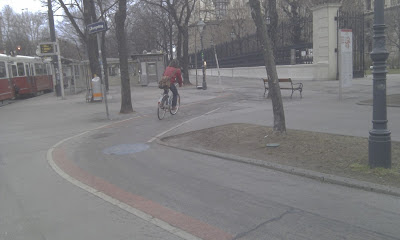 This of course leads to massive and constant conflict between cyclists and pedestrians.

The central 3 lanes can best be described as a motorway.  The speed limit of 50kmph is much less than the average speed that feels appropriate to drive on this massive road.  However upon turning off the road into the inner district especially you brake from 60kmph checking over your shoulder for trams, pedestrians and bikes.  It is normal that if you do this at an appropriate speed to make sure that there are no trams, pedestrians or bikes about to shoot across at 30kmph you will be honked at by the impatient driver behind who does not understand why they have had to break from 70 to 5kmph. 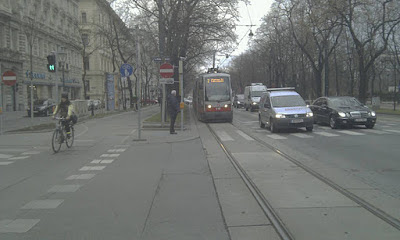 How would you CROWize this to make it more bike and pedestrian friendly?  Many believe the whole road should be Pedestrianised.  There is no need for most of this traffic with the excellent public transport and the large roads surrounding the centre.  However I will take a softer evolutionary approach with 2 configurations that do not require the expensive movement of tramlines or trees:


Use the inside lane as a bi-directional cycle path.

A main problem at the moment is that we have a busy Through Road connected to quiet Access Roads, without Distributor Roads between.  Putting a cycle path at this sharp border makes matters worse.  Therefore the remaining 2 lanes would need need to be changed to slow the motor traffic down to 30kmph if the junctions are going to have a chance of working.  Therefore turning the central lanes in to a Distributor Road and dramatically reducing all traffic in the centre would also need to be done.

Use the side access roads for a proper cycle path.

This would leave the central road as it is and modify the access roads to cater for a good quality cycle path.   It does free up pedestrian space and remove a lot of conflict.  I will talk later about some design details but I think this is the most realistic configuration option.  I think it will improve the very dire situation that exists at present that I find totally unacceptable for cyclists and pedestrians.

This will involve the removal of some car parking which is politically very difficult.  The question here is what is more important a few car parking spaces or the safe and pleasant transit of 5000 cyclists and even more pedestrians? I am sure that if the cycling infrastructure across Vienna was better we would be talking about 20000 cyclists using this facility each day.  I would like to think the needs of thousands are more important than the wants of a few but it is for the public to decide how to allocate its public space.
Posted by Doug Culnane at 09:40