Heldentor is an massive Hero's gate to the Hero's Place. In summer there are a huge number of pedestrian tourists walking between the gate and Maria Theresin  Platz on the other side of the Ring. The level of traffic through the narrow openings of the gate is very low.  The occasional horse draw carriage and Taxi.  Despite the low volumes of traffic there is a huge road and traffic light regulated junction providing a big obstacle on the Ring Cycle Path.

The not very visible painted on cycle path swings into the pedestrian crossing in order to share the traffic light. The pedestrians normally have no idea they are on a cycle path until a bike slaloms through them.  The red light is not very well respected and often jumped because a lot of the time it is frankly not worth taking seriously. 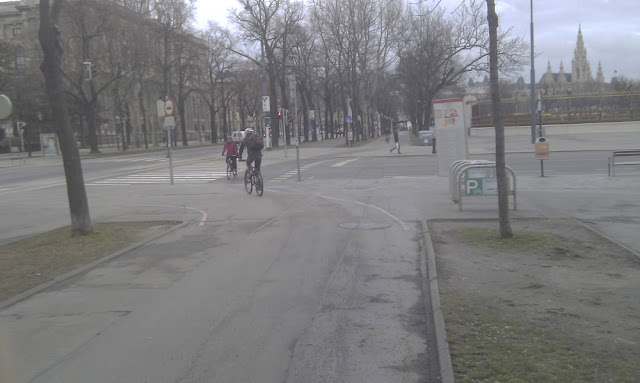 Here is the plan of this junction.  Note that the ring has 3 lanes between the tram lines so the Heldenplatz road is about 5 lanes wide! 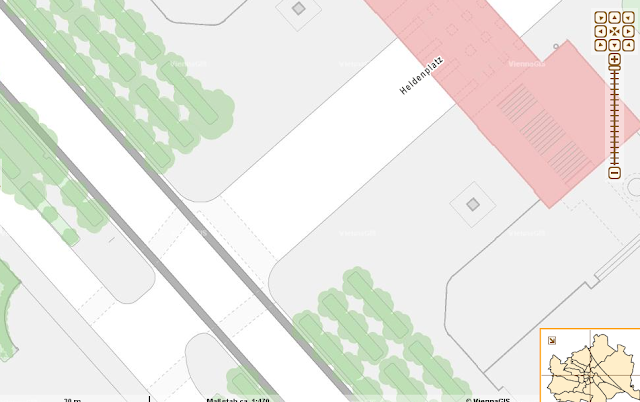 How could this space be made pleasant functional and better designed?

Well you only need one lane in and one lane out of Heldenplatz.  These lanes are restricted by the 350 year old gate openings.  The middle of the 5 openings could be used to create a pedestrianized strip to the ring and used to host statues of heros or whatever is deemed suitable. 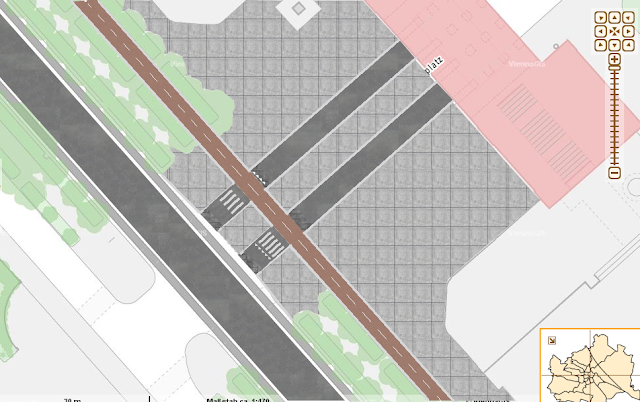 Narrow lanes will be much easier to cross for pedestrians and bikes to the point that the traffic light could be removed. The pedestrian crossing can be raised to the same level as the pedestrian zone and a speed bump traffic calming effect used. Pedestrians can wonder around with one less traffic light and bikes have a straight uninterrupted cycle path.

If the pedestrian crossing is moved out from the Ring then cars have a stacking space which they can use to separate the junction from the pedestrian and bike crossing (un-bundling the conflict).  This makes it easier for car drivers entering and exiting the road.  It is easier because you have to see stuff that is in front of you rather than over your shoulder and you have a 2 stage manoeuvre rather and one complex one.

This place should be a tribute to heros but I feel it is a tribute to the unquestioned dominance of the car and the motorway.