I have heard that "Radwege are Dangerous" from  Rad lobbies, District Representatives, Politicians, the Cycle Agency and countless 25 year old male cyclists in Vienna. These comments are backed up with references to studies  showing that junctions are problematical when cycle paths meet motor traffic.  Therefore we should "Share the Road" which seams to be a large part of the policy focus in Vienna, probably because it is cheap and politically easy to implement.

Firstly the studies often do not take into account the quality of the Junctions design.  They are often mis-translated and misused using absolute numbers of accidents, ignoring the dramatic increase in numbers of cyclists that occurs when separate cycle paths are built.  Anyone that pretends there is absolute proof about this is just a lair or a brain washed member of the Vehicular Cyclist Sect.

The Dutch have an excellent safety record for cyclists despite a wide range of ages cycling and many supposedly dangerous cycle paths.  This is often explained  away as being a Safety in Numbers effect.  However this shows either a blatant ignorance of Sustainable Safety principles or a dishonest distortion of the truth.  For sure these are complex themes with many contributing many factors but I think the basic conclusion that Radwege are dangerous shows nothing but arrogance, ignorance and dishonesty.

If  you mention that cycling on busy roads is dangerous then you get quickly shot down for dangerzing cycling and discouraging it by the exact same group who tell you Radwege are Dangerous.

This image seams to be the best statistical safety comparison between the UK and The Netherlands. 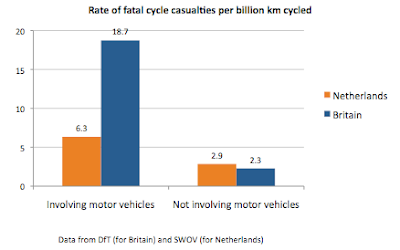 The UK has a mix strategy (or no strategy) and the Dutch use Sustainable Safety to engineer their streets which is largely a strategy of conflict reduction and separation of different traffic modes and road functions.

So either there is a safety in numbers effect or mixing cycle traffic on busy roads is dangerous.  Lets ignore the traffic planning and routing, the different junctions designs and road types, the fault tolerance of these designs and all the work that the Dutch have done over 40 years funded by a 30 Euro per person per year budget and say that has had no effect of safety in any way (as some members of the Sect would like you to believe).  Lets just say it is all because of Safety in Numbers.  So how do we get the numbers?

Either we can copy the UK which has a third of Austria's modal share for bikes or we can copy The Netherlands which has 3 times Austria's cycle modal share.  I would suggest that the Dutch have been better at maintaining or increasing the number of cyclists than the British.

Either way (safety in numbers magic fairy dust or 40 years of cycle friendly road design development) lets please copy the Dutch strategy because it works for some reason.  To do this we need public support and to most people you loose that support instantly when you tell them them cycle paths are dangerous and for beginners and scared old people or children.  No one wants to be in the inferior group and most normal people are not comportable cycling on busy roads, so it is a hard sell.

Today a big important announcement was made that would be perfect if the following sentence was not in it.

Translated this means: "Cycle paths are only useful for inferior cyclists that are not good enough to cycle on the road so we will allow you to cycling on footpaths if there is space."

I really hope I have misunderstood and mis-translated that but I worry that I have not, and that the "cyclists belong on the road" V. C. Sect will combine with weak politics to create a city with footpaths built for pedestrians and roads built for cars.  The hope that the "Kultur des Miteinanders" will happen by magic (or  advertising campaign) and mean cyclists will be tolerated in both environments.  This will not work and so we can expect a lot more conflict in the press and on the roads, as people struggle to cope with an environment that ignores their needs.  It is time to stop listening to cyclists.