If ever there was a junction that was a total mess it is this junction.  It has recently been redesigned to Vienna best practice to accommodate cycling.

It is part of the Vienna main cycle route network (solid red lines) which goes diagonally across it.  However there are gaps (to put in nicely) so getting across here involved illegal and creative use of the road and footpath.  It was interesting to see all the junction free-styling that went on here because every time I thought I knew all possible ways of coping with this junction someone would surprise me with a new way... 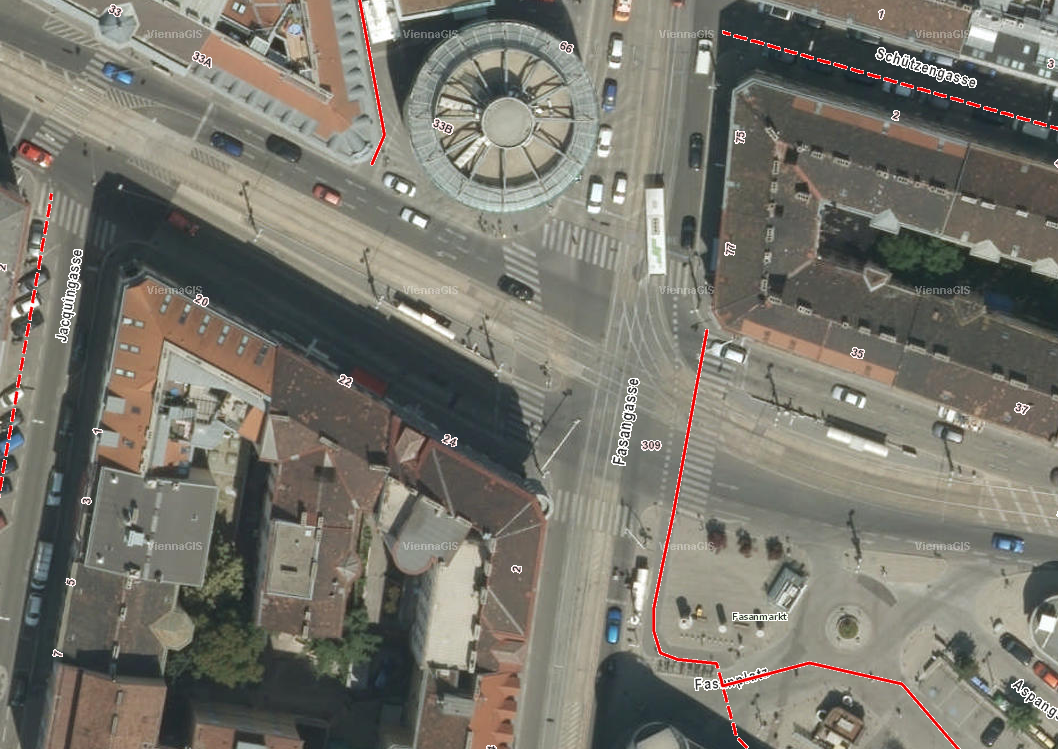 It was an appalling design for cycling and the new design seams to be no more than basically painted on guides for some of the free-style moves.  The new design will not stop illegal behaviour because cyclists will go with the first green light to get diagonally across the two stage stop diagonal crossing.  So this means half the time they will go anti-clockwise (sort of legal) and half the time anticlockwise (illegal) around.  The new design is confusing and creates dangerous conflict merge point just after the junction on Rennweg in both directions.

Lets remember that Vienna is a city that wants to half motor car use and promote cycling. If we areto take these claims seriously then we need more than confusing conflict inducing paint.

What I would like to do is explain why I think this mess was created and how I would try to pragmatically solve the issues better in a cost effective way.  I am sure there are many many solutions and I would love to post some options here from others if they propose them.

How did this mess happen.

If a city does not have the political strength to put separate quality cycle paths on main roads you end up with a separate network for cycling using quiet roads and back streets.  This can work if the routes are direct and where people want to go.  You can tell which routes people want to go because these routes become main roads...  However the separate route (the red cycling network) is not too bad but it has to cross (in this case diagonally) the main roads.  This creates very complicated junctions. So you need a solution for this.  Unfortunately Vienna does not even have a good solution for simple main road junctions let alone very complex ones.  Their best practice paint on version of the Copenhagen left hook or a bike box (ASL) are at best a "coping strategies".

Through traffic is restricted in its turning movements on the junction to minimise left turning conflict with the trams and to further increase the capacity of the junction for motor traffic by using the surrounding small streets.  This means that we end up with the ridicules through road Jacquingasse.  This is a though road that has motor traffic funnelled on to it, It is unrestricted along its length with traffic lights and to slow down this rat run there are at least 2 large speed bumps.  If you have thought traffic and speed bumps then you should realise something is very wrong.

How would the Dutch fix this mess?

One of the basics of Sustainable Safety is road classification.  We will apply this and keep the through roads (Rennweg, Ungargasse and Fasangasse) as through roads.  The other road will be access roads. We will allow vehicle turns in all directions on the Junction to facilitate movements and mean we cut out the rat running.  This will also make our junction simple and manageable.

We will use traffic control separation (traffic lights) to separate out the modes. Each mode (trams, motor traffic, cycles and pedestrians) have their own lights anyway.  We will have an all green for cycles and pedestrians to make the diagonal crossing in one phase and to stop the turning right motor traffic blocking straight head flows.  This removes the requirements for many queueing lanes and frees up lots of space.

I simple North-South and East-West light phase with simultaneous green for pedestians and cyclists in all directions and a weighted priory (on the modes with the most users) will allow the timing to be optimised to increase the people movements through the junction (at different times of day...). I suspect this will increase its people capacity even if the metal box capacity is reduced slightly.  This can be optimised with the help of computer models but that is beyond the scope of this blog.

Rather than a roundabout I will stick to the classic Dutch protected intersection which is similar to the current layout an does not require expensive tram track changes.

I will also connect the current cycle network put proper cycle paths along Rennweg where they are desperately missing especially towards the centre.

Here is a basic sketch of my cycle infrastructure layout.

The only traffic lights are on the junction.  This removes the one at Jacquingasse.

The bi directional path across the junction is maybe not needed with the all green light for cyclists and pedestrians.  I have drawn it to help indicate desire lines more than anything.

The detailed curb layout would be like the protected intersection which explains this well. You probably do not need the tracks across the junction with a proper all green design.

Jacquingasse turns into a proper Fahradstrasse with no though traffic.  This would help create a bike route up to the Sud Bahnhof that is motor traffic free but the other end needs sorting out too...  However it means Fasangasse can remain the way it is if this is done well.

The above is very basic and needs a lot of detailed work but I hope it shows that:

- Road Function and traffic routing are very very important.
- There is always space for cycling infrastructure if we have the balls to rethink junction capacity.

Have a go yourself.