Pedestrians belong and have a right to walk on the footpath.  The problem of Conflict between Pedestrians and Cyclists can be easily solved if there is a Vienna wide walking pace speed limit for cyclist that is strictly enforced by the Police with hefty fines. Cyclists need to change their attitude and be more patient with other users of the public space. 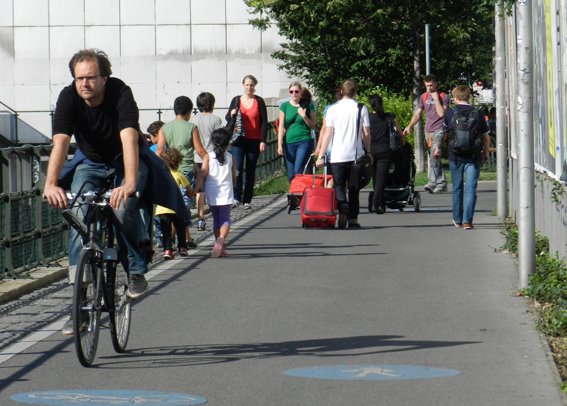 The above may sound logical to little old ladies who are angry by the young cyclist that whizzed past them on the  Cycle / Pedestrian shared use path. However most cyclists (I hope) will find this ridicules and oppressive of their rights and needs.

However a lot of cyclists seam to think the same about the solution to the car and cyclist conflict.  Why on earth should a car driver be patient with cyclists when those cyclists are not prepared to be patient with them once they get out their car and become a pedestrian?  Is a modern city a city that has cars limited to bike speed or bikes limited to pedestrians speed, or is this one group trying to oppress others?

Behavior is extremely important and we all have to be patient and tolerant of others but when others ignore you and impose their needs on you that is not sharing it is dominating which results in conflict.  Now it is fair to say that cars have dominated and imposed their needs on the public space unfairly for the last 50 years.  But now it is time for pedestrians and cyclist to win some space back.  We will not do this trying to oppress others into unnatural behavior.

We need road design that understands the needs of the users and incorporates this into the engineering. Yes lets share the road when traffic volume is low and speed is below 30kmph.  But on Main through roads there will only be conflict if cyclists (perhaps rightly) claim their space in the way of fast moving cars.  Yes we need space which can come from parking or traffic lanes but mixing will not work if there is large amounts of fast moving motor traffic.

So rather than trying to control others behavior lets look at road design and engineering strategies that  remove conflict and make a safe and pleasant environment for cyclists pedestrians and motorists.
Posted by Doug Culnane at 10:46