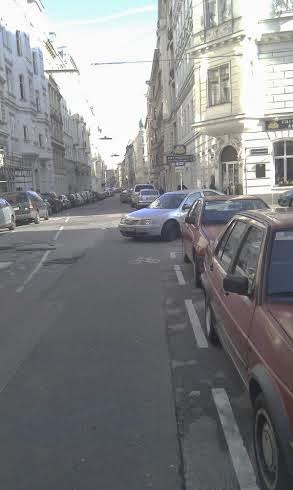 In this video you see a cars swinging round the corner and then a second that stops to look properly but only looked right and so I had to emergency stop.  It was after they started to turn left that I got eye contact.

I cycle this route most working days and have so many conflicts here with cars.  I have also seen a cyclists sat on the curb with their beading head in their hands.  This clearly needs a proper solution.


The main problem is that cars have to give way but the only indication is a triangle sign off to the side above parked cars.One third of drivers seam totally un-aware of this give way sign. Some kind of simple who has right of way system would  help enormasly...http://crowize-vienna.blogspot.co.at/2012/07/sharks-teeth.html and this would indicate to the cars they have to give way.  The triangle sign is totally useless and so are sharks teeth unless the implementation is consistent... 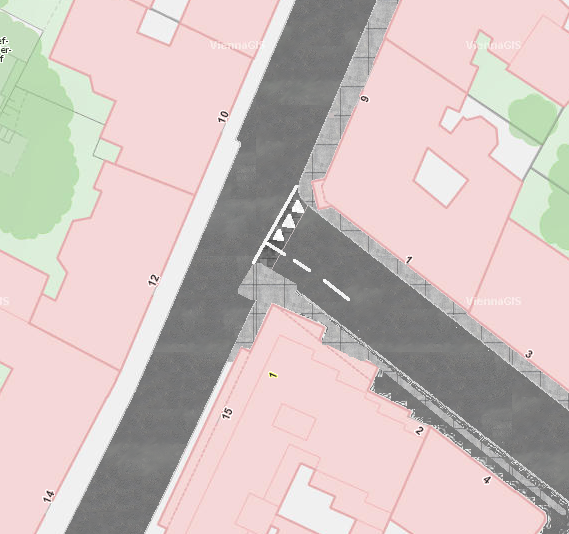 The line the cars have to drive if they turn left is also a problem. The diagonal parked cars make the road very narrow and also force turning cars to queeze in close to the parked cars on the left. The diagonally parked cars need to be removed to make the turn left more open.  However the turn radius needs to remain tight to reduce speed.  Bringing out the curb in to the road would help pedestrians too.

These turning cars have really really bad slight lines.  They can not see bikes coming until they are already turning and then it is too late. Bike parking racks on the corner would stop vans parking there and improve the sight lines a lot.  A raised junction like the one at Marxegasse and Gärtnergasse would help to reduce speed of cars.

This route is again used as a rat run and it is a main route for cyclists.  This conflict of function multiples the design problem conflicts.

In my opinion there is a general problem that bikes are used in 30kmph  zones as traffic calming devices.  This might work for most drivers who drive carefully in these unclear road mazes.  However it does not create a good cycling environment if your role as a cyclists is to slow the aggressive drivers and you have to put your body in the way of their badly driven speeding cars.
Posted by Doug Culnane at 02:56