After my last post about this terrible road design I have received various well meant advice and comment that the cyclists is at fault for not taking the lane. 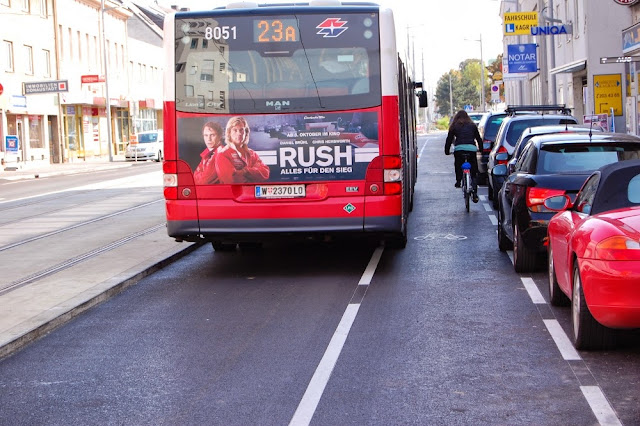 Cyclists are expected to block this 50kmph busy road to stop motor traffic overtaking as a strategy of  coping with it.  They are also expected to endure the aggressive contra-strategies from the impatient motorists.  This advice tends to come from the same groups who fights against the compulsory use of the cycle paths because they do not want to be held up by "beginner cyclists".  Expecting others to be patient and considerate so I do not have to be is called "miteinander (together) culture".  At the same time cyclists are surprised why so many people hate them and they get such bad press.

To me this seems like a recipe for conflict if ever there was one.  If only there was a solution.

Luckily our Vienna Bike Representative has been talking to the cycle lobby and presented Vienna's first attempt at the solution to all our infrastructure problems the Sharrow. A sharrow is placed in the center of a travel lane to indicate that a bicyclist may use the full lane.  This is more correctly referred to as useless paint.  None the less it is an attempt to improve conditions for cyclists so I present Vienna's first attempt at a sharrow. 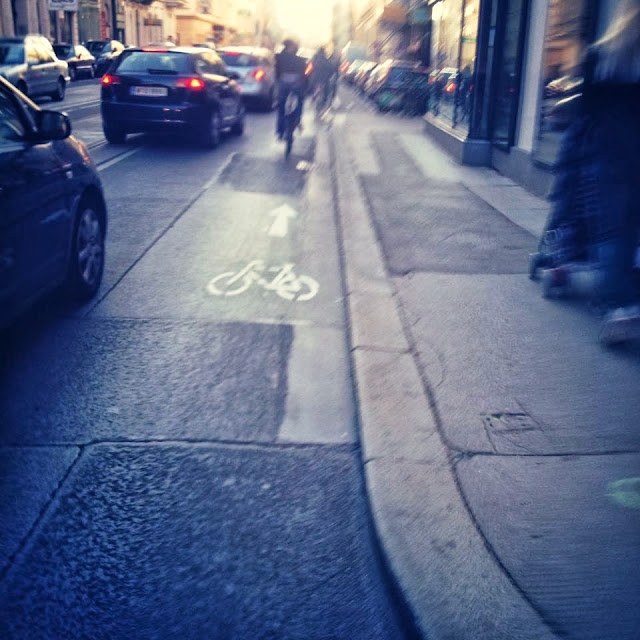 For a long time I have been trying to communicate that Dutch style road design could reduce conflict and improve safety and conditions for cyclists.  Mark's excellent Video was inspirational to me and it frequently gets posted in cycle forums by others who also think there maybe better ways to design our roads.  This normally gets dismissed with a barrage of we are different comments.  Why on earth would some existing cyclists be so anti these ideas that clearly work well in the Netherlands?

This video seems to be the convincing argument that dictates cycling strategy in Vienna. It is utterly flawed but lets not worry about details. Separation is Nazi oppression and dangerous, so we need to integrate cycles with the motor traffic for their own safety at Junctions.

Godwin's Law states "As an online discussion grows longer, the probability of a comparison to Hitler (or Nazis) approaches 1."

This debate has gone on far far too long and we have arrived at the Nazi argument.  It would be funny but we are getting worse and worse infrastructure that induces even more conflict.  If you mention that this is uncomfortable a large portion of the reply is it is your fault for not using it right.  I am tired and fed up of these discussions and I know there are people out there that are very very tired of hearing it.  If we want to move cycling forward in Vienna to be a more mainstream activity we have to stop listening to cyclists and consider that when confronted with the idea of "talking the lane" the vast majority will choose to "take the car" and do not care why you are getting in their fucking way.

Honestly think cyclists are just there to be killed! Nearly knock one down everyday! Why cycle on a road? Dont understand #getaway
— tashastryder✨ (@tashastryderX) October 2, 2013


Cannot stand cyclists! Get out the fucking road swerving and shit! 😡 gets on my last nerve!
— Jade Clayton (@MissJadeLeighC) October 8, 2013


@CyclingMikey @cycleleics @hexhome cycle lanes are for bikes, use em you fuck. And you can cycle through traffic jams...
— Newton (@PalaceNewton) October 7, 2013

Allocation of road space for cycling, and traffic reduction needs main stream support so we need these people on our side.
Posted by Doug Culnane at 12:22