As part of the Ring Vorlesung program there was a very interesting presentation about the history and operational issues of the Vienna City Bike system. Presentation by Hans Erich Dechant available here.

Version 1 of the bike system the Vienna Bike was like a shopping trolly system where you could get a bike for 2 euros and had to return the bike to get your 2 euro coin back. Theft was not the issue with the first low tech system (as is often believed) it was that bikes were not shared and vandalized. Bikes were kept too long because that was the easiest way to ensure one was available for your next journey.  The picture of the bike being retrived from the canal by a diver that apeard on the frontpage of a newspaper generated so much PR it delighted the sponsor so much they donated 200 extra bikes to the scheme the next day.

Vienna Bike was a bike share failure but the publicity around the scheme resulted in a large budget and advertiser interest for the next high-tech station scheme.  Some of the highlights of the new system are:

Most City Bike trips are about 3km and 10 mins.  The first hour is free so the vast majority of trips cost the user nothing. The scheme is designed to facilitate short trips and help connect other transport systems.

Optimized software and processes at the terminal attempt to make the system as easy to use as possible.

4.5 people's lives are saved each year because of the heath benefits of City Bikes.

Placement of the stations is very important.  Placing a station at the top of a hill and one at the bottom means you need a truck transporting bikes up the hill all day long.  It would be better to use a bus to transport people in both directions.

Per meter square a City Bike stand gets 5 times more use than a car parking space (in the central short parking zones, even more use happens where parking is free).  That means shops could get 5 times more potential customers if they reallocate the parking space outside their shop to a city bike station. 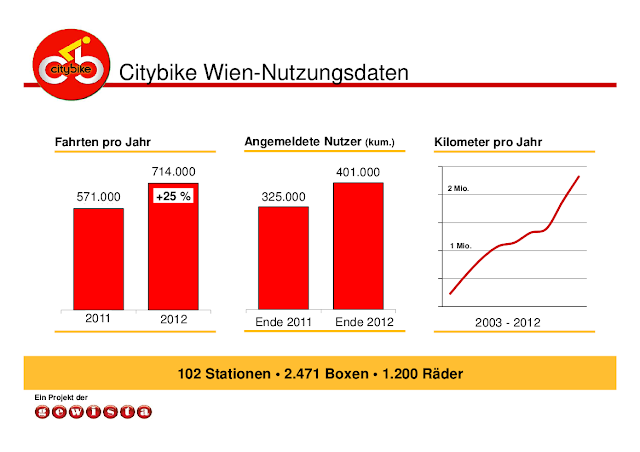 Paris has 5 times the number of bike stations in a 2km radius than Vienna.  The Vienna system needs more stations and bikes to make it an even more effective public transport system. The KM per Year curve above shows the stages of the station building programs clearly.  Convenience is the key driver of bike usage and usage grows over-proportionally to the number of stations.

I am very impressed by the Vienna City Bike system which I think is really great.  I am an occasional user of it myself. It has a high cost but it has huge social, congestion, health, environmental, space and cost benefits for Vienna. It is much cheaper (for the user and City) than Public Transport, or car infrastructure.  The key to success is understanding people and their needs and developing a system that works with other forms of transport. This has created a real bike share based public transport system.  This is something that is taking off all over the world with the latest system being launched in New York.  However if you watch this Video you will clearly see there are real issues to consider when using bikes as a modern form of mobility.