150 years of change on the Ringstraße

The Greens have initialized a discussion about the 150 year old RingStraße. They presented 2 proposals and no doubt the discussion will quickly develop into pathetic polarizing Vienna politics, but before it does lets think a little. As more and more cars used it it developed into a 2 way street and then a one way 3 (or 4) lane ring road. It is still a wonderful avenue that has adapted well, mainly due to its huge width.  The huge amount of space is a result of the old City defences that required a clear shooting plane.  This space has many functions and is dominated by the huge number of pedestrians and the 3 lane ring road of motor traffic.

Cycling has been squeezed in too, after the car parking, tram lines and through traffic etc... This was mainly at the expense of the pedestrians.  There have been improvements recently to small sections and in some parts it is wonderful for cycling but there is a lot of conflict between cyclists and pedestrians who are squeezed together while cars take up to 10 lanes of the space.  (There is a very good assessment of the Ring in this book.)

The City of Vienna have a target of halving car use in the next 10 years and promoting cycling, walking and public transport.  So it is clear that going forward the balance of space allocation has to change and my survey 3 years ago showed how nearly everyone was interested in the discussion and most were very open to the idea of change.

The 2 proposals presented by the greens are good and speak for themselves. We could argue about details (and probably will - cycle paths are too narrow...) but generally speaking they are sensible and the kind of professional work you would expect to get from a good urban design consultancy.


How would I Crowize the Ring?

I will oversimplify this so that this post is not too boring and even more long winded.  I will take a more evolutionary approach than the utopia design renderings which never have any cars on them.  I would do this in stages that could be done independently or in parallel.

Stage one (Do the bloody obvious on the inside). 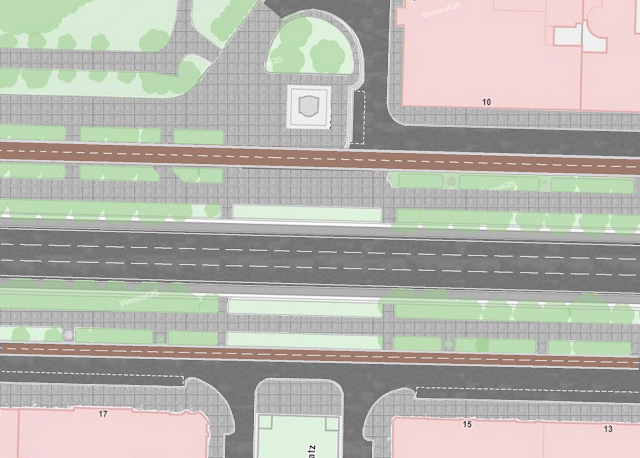 On the inside of the ring I would make a continuous cyclepath in the middle of the 3 lane footpaths (like the wonderful section at the Stadpark on the outside of the Ring).  This is illustrated in the Northern part above.  If there was a sausage stand in the way I would move the sausage stand or modify the U-Bahn exit...  The result must me a clear continuous through route for cylce traffic that is distinct from the pedestrian areas.

I would continue this lane where there is a side road on the parking lane.  The loss of parking space could easily be created on the inner central lane on a part time or per section basis.  (I know that putting parking on a 3 lane motor way is really really bad design but it is common in Vienna so why not.  Someone else can write a blog about the bad design for cars in Vienna)

Junctions would have space for turning cars to wait and cross the cycle path and pedestrians crossings at 90 degress without the pressure of the tram ramming them.  These junctions would be designed to be like a pedestrian zone and motor car movements in and out of the center would be reduced as much as possible.


Stage 2. (Do the complicated outside.)
The outside is more complicated. There I would do a combination of the cycle path illustrated above on the southern side of the drawing and a mix side street solution illustrated below. 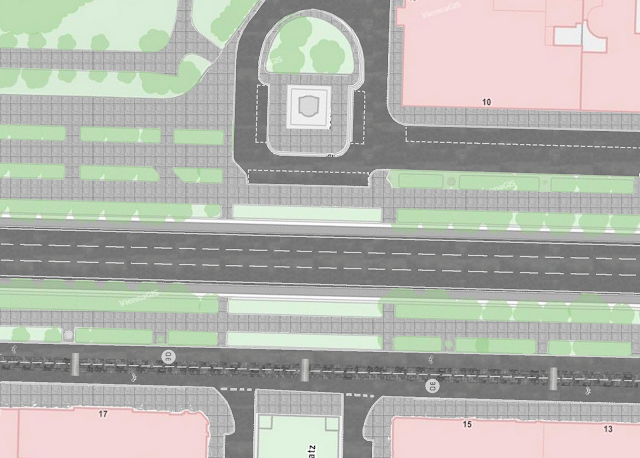 Stage 3 (2 way traffic in the centre)
Then I would change the central 3 lanes into a 2 lane 2 way road and redesign the junctions.  This would create a less motorway feel to the road and make distances sorter and more direct but slower for cars.  Car parking could also be made available in the central lanes to remove it from the side streets.

Throughout all these stages there would be opportunities to humanize the side roads and create nice spaces in sections.  The above I believe to be a pragmatic incremental approach that would allow surrounding roads to also be adapted to the shifting traffic patterns.

The Ring is 150 years old and in another 150 years we will be extinct if we continue as we have for the last 150 years. You can argue all day long about change but you can not argue with Maths. Change in our world is exponential and so things chance faster and faster. The people that say you can not change things are normally really saying "they do not know how to change things".  However if we want to change things for the better then we can not shy away from the discussion.